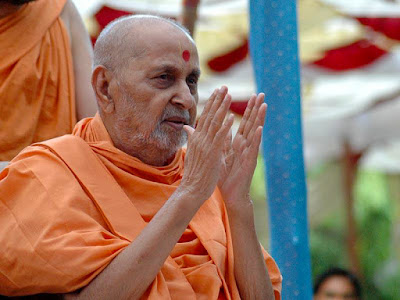 Kanubhai Barot and Shreyas Pandya are dedicated volunteers at the Chicago BAPS mandir. They were engaged in a mock spat before Swamishri, apparently quarrelling in the Martian language. After a while they stopped their gibberish talk. Kanubhai explained what they were quarrelling about, “Swami, I said that Pramukh Swami is mine and Shreyas claimed that you were his. Now tell us who do you belong to?”

Swamishri unhesitatingly replied, “To those who genuinely offer bhakti to God.” Everyone happily clapped at Swamishri’s wonderful answer. Then Swamishri added, “And not to those who quarrel!”

“… Also, in the same way as the jiva, the ishwars such as Brahmã, etc., also experience creations during their dream state. Do they themselves become the form of the creation? Or do they create it by their own will? Or does God, who transcends both jiva and ishwar, create the creations experienced in their dreams?”

Thanks for subscribing! Please check your email for further instructions.